100 percent organic and home made. 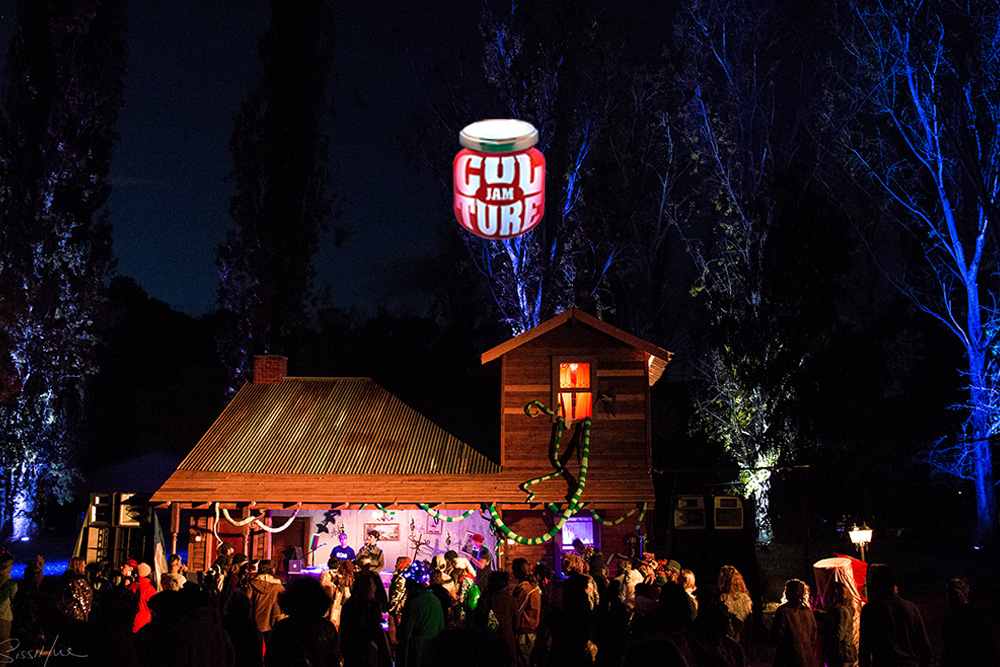 The fundamental idea is that art and theatre should be a dynamic and rich two way experience, opposed to something that is just consumed or observed.  Attendees bring their own incredible surprises to share with the space, and this is where the magic happens. Dress-ups, skits, gifts, role-play and interactive absurdity is all common language at our events, and the best thing is, everyone is prepared for the unexpected.

We have gained a very strong following due to our dedication and uniqueness. This has got the attention of media outlets such as Vice Magazine, Beat Magazine, Time Out UK, El Pais in Spain, and had us featured on the front cover of Melbourne’s own MX.

Culture Jam has just celebrated our 10 year Anniversary and over this time has created a strong ethos and a community that embodies this. This includes theatrical participation, sustainable living, cultural and gender diversity, and giving back to those in need.

Our focus now is bringing the immersive fun and magic of our events into the every day experience. Projects we are working on include real-world gaming, experiential scavenger hunts and the development of an immersive gaming app.  We pride ourselves on unique creativity, mind blowing ideas, and positive uplifting events that make change in people’s lives and the larger world.

Look forward to seeing you at the next Jam for another epic co-creation.

What is Culture Jamming?

Culture Jam is a term that was coined in the 80’s by the band Negativland, but it’s roots go right back to the early 20th century when people started rebelling against advertising and it’s constant domination of the urban landscape and our psyches.

Traditional Culture Jamming is the modification and subversion of ads to expose a truth about them.  Billboard modification is its most well known form however today Culture Jamming uses multiple forms of media to parody businesses and turn their own manipulative techniques against them.

As famous Culture Jammer Banksy points out, we are bombarded with advertising and very rarely have the chance to communicate back. Culture Jamming is a tool to give us that voice and let people knock down the big brands.

Examples of local jams have included NO WAR being painted on the top of the Opera House, Pauline Pantsdown legally changing their name and running in an election against Pauline Hanson and The Chaser getting past two security checkpoints at APEC, dressed as Osama Bin Laden.  Smaller examples are really good memes, or awesome tongue in cheek slogans and costumes at protests.

While Culture Jam generally focuses on exposing truths behind bigger corrupt forces, we also love using it to make fun of everyday life, subcultures, and ourselves. This playful approach is what you will see a lot of at our events.

We encourage you to explore this powerful art form and see how powerful playful parody can be. Whether done for fun, to make people think different or to make important political statements.